A good month for Adam, straight in at number one. Nick loses his top spot and has to settle for 2nd (he's not gonna be happy about that). Mr Roger and Bryan swap places and Col (aka Big Red) moves up to 6th. A bad month for Dean who drops from 2nd to joint 7th.

In order to be ranked on the monthly table you must have played a minimum of two sessions within a month. 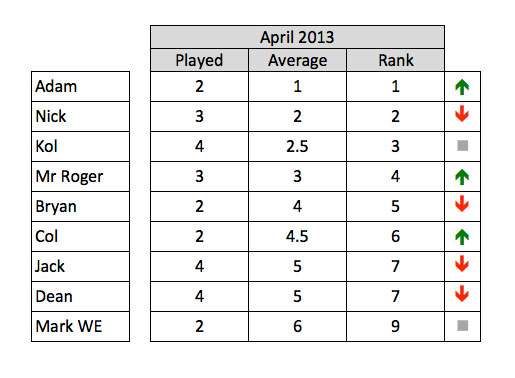 Not much have changed on the Players Seeding after today's session. The averages for all who played today have improved though. 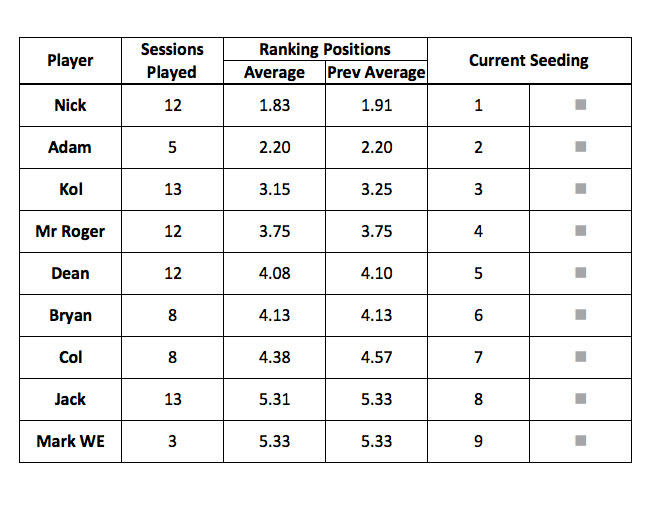 Another great "mix it up" session today. Only 5 player so a lot of 2 on 2 action. Once again Nick reached the number 1 spot. Well done to all who played.

And the individual games 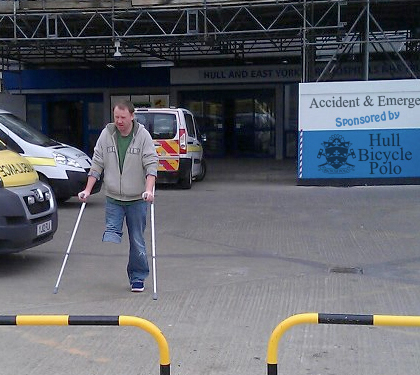 A good turn out for last Sunday’s “Mix It Up” session. 8 players and a lot of  great goals, skilful passing, swearing and falling off.

Big Red made his long awaited return and came in at an impressive 6th place. Not bad considering it was only a few weeks ago that his leg was amputated. Looks like prosthetic limbs are the way forward. Rumours are that he is thinking of having his right arm removed and replaced with a mallet. We asked a senior surgeon at the NHS what he thought of this procedure. He commented “Are you mad?...get out of my office before I call security...and for god’s sake put some clothes on.”

Adam managed to scrape his private parts across the full length of his bike. A very nasty and spectacular looking incident which could have been a lot worse. Luckily his bike survived.

This weeks session looks like it could be a bit short on numbers as Mr Roger and Adam are off doing the Heart of the Wolds Cycle Sportive. Good luck guys. Bryan and Mark are also absent as they are in Whitby chasing (or being chased by) Goths.

As usual we meet at 2pm at Wellington Lane Hardcourt. Everyone welcome to come and have a go.

Posted by Hull Bicycle Polo at Saturday, April 27, 2013 No comments:

A seeding table has been set up based on the rankings from previous "Mix It Up" sessions. The seeding is based on the average ranking from all of a players sessions. If two or more players averages are the same then the seeding is based on the number of sessions played. Those who have played the most number of sessions will receive the higher ranking.
Only the ranks from top six players in a "Mix It Up" session will be added to the seeding. Anyone who comes below six will also have a ranking of six added to the seeding. This is to allow for the different numbers of players turning up to the sessions. Hope this all makes sense. Kol 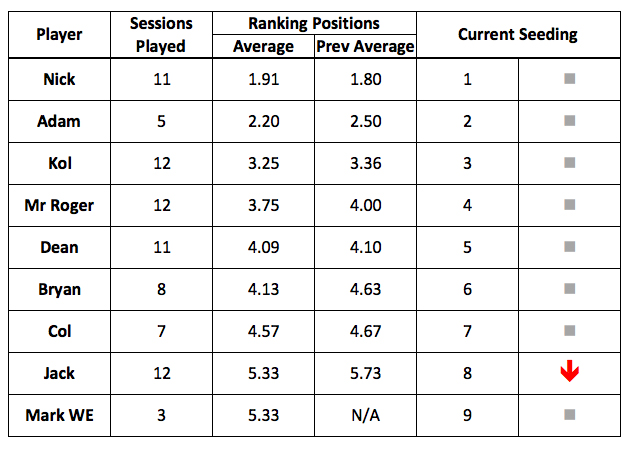 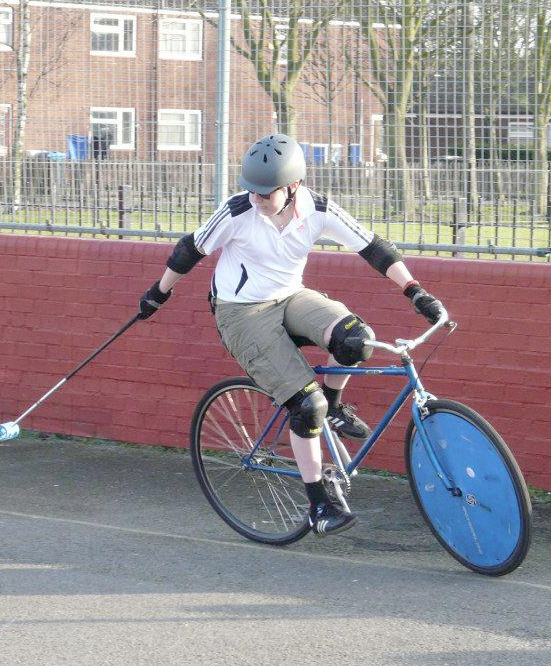 The highlight of last Sunday’s “Mix it Up” session must be Young Jack’s momentary lack of concentration.
After being set up with a simple tap in to an open goal, he forgot which way he was going and cleared the ball. On a plus note it was one of the best defensive moves I’ve seen for a long while.

Bryan once again lost a testicle in a spectacular dismount. I’m not sure how many testicles he has left but I’m sure he’s going to run out soon.

In other news, the “Shouty One” returns this weekend to defend his number one position. Rumours are that Nick is a bit out of shape after spending a week in the Scottish borders in gale force winds drinking plenty of whisky and eating haggis. Could this be the week that the ECB Bruisers superstar loses his #1 spot.

The Shouty One Is Back.
Posted by Hull Bicycle Polo at Saturday, April 20, 2013 No comments: 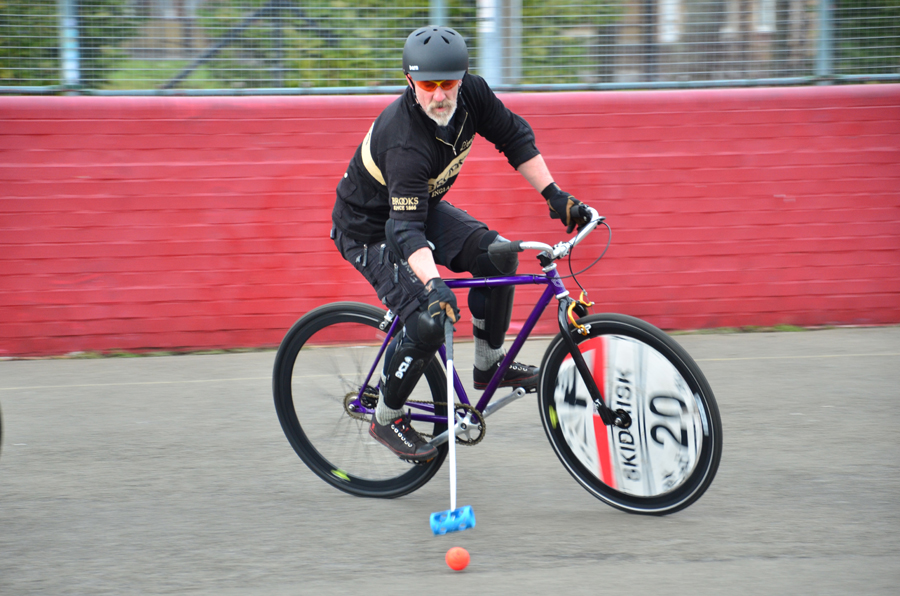 Volume levels are expected to drop at Hull Bicycle Polo’s Sunday session after the unexpected news that ECB Bruisers superstar and HBP’s current top seeded player will not be available this week.

Official sources said that East Coast Bicycles shop owner Nick would not be available to play this Sunday due to a family holiday.

Rumours throughout the Hull Bicycle Polo community have been spreading fast. Anonymous players have made comments such as “He’s just trying to  project his position in the seeding”, “Scared of It”, “Nick doesn’t have holidays” and “Which one’s Nick?..... is he the shouty one”. In an official statement Nick said “I really am going on holiday” and raising his voice slightly, “Why don’t you believe me?”. Unfortunately we cannot publish any more of Nick’s comments as some of his words were very rude. On hearing the news that Nick would not be playing, HBP’s youngest player Jack said “whooohoo”.

Whatever your opinion on Nick’s absence you can be certain of one thing.

It will a lot quieter this Sunday.
Posted by Hull Bicycle Polo at Saturday, April 13, 2013 No comments:

Sunday "Mix It Up" Sessions

Hull Bicycle Polo's Sunday "Mix It Up" Sessions are proving to be a huge success. Players are given a number at the start of the session. These numbers dictate which teams they will play on. The teams are changed after every game so (depending on the number of players) you will not play in the same team line up more than once. At the end of the session players are ranked on the number of games they have won. It's great fun and everyone is welcome to come and have a go. 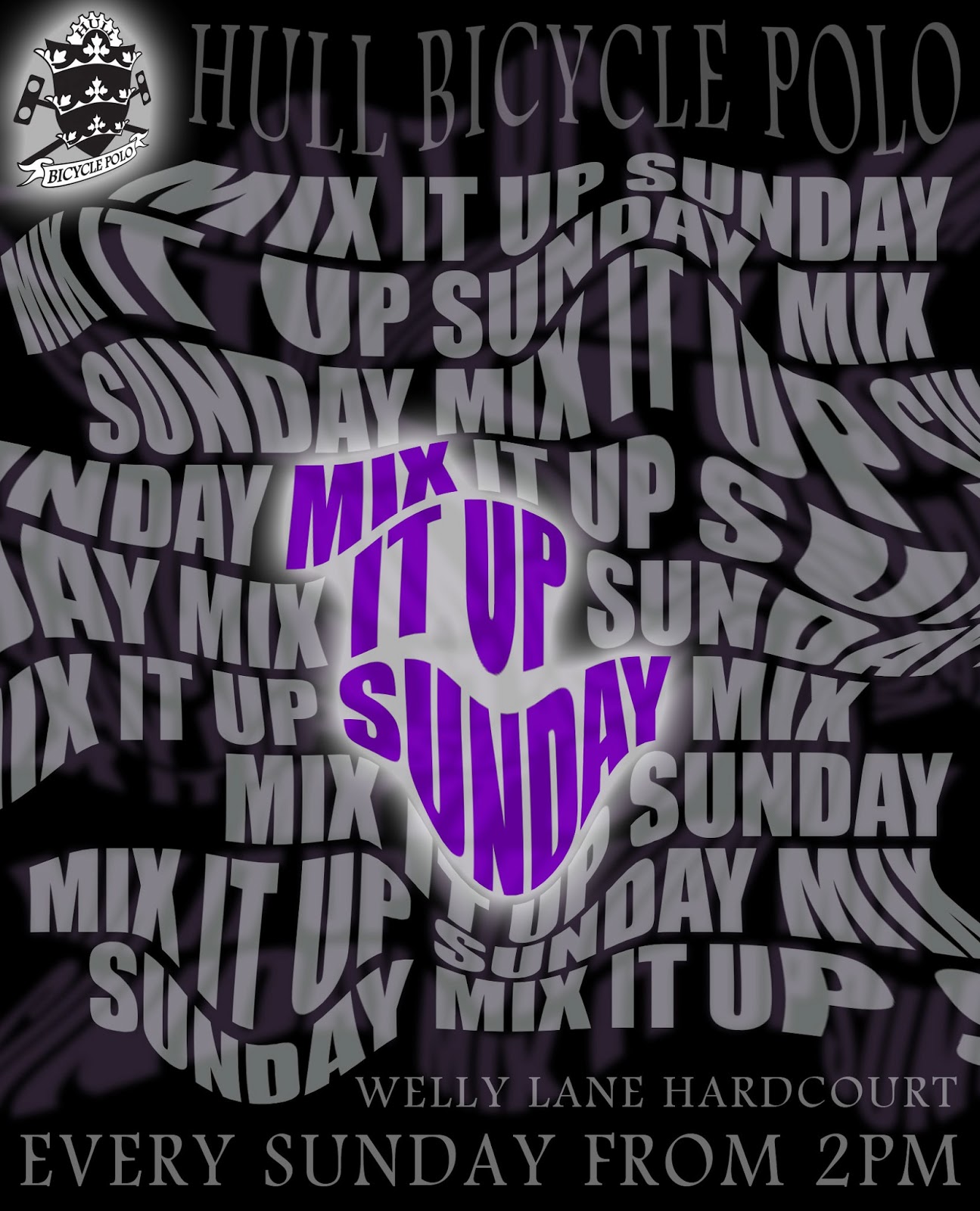 Posted by Hull Bicycle Polo at Saturday, April 06, 2013 No comments: