Dean “Double Dean” Dent was in impressive form last week. He won the session by six clear points, scored 10 goals and did some excellent defensive and attacking moves. This was Dean’s second win of the season but by far his best. The result put him back up in 4th in the league. Fourth (or 2x Double Dean if you prefer) has become Dean’s favourite position. Well done Dean. Its a shame you don’t perform like this every week. (ooo er missus). 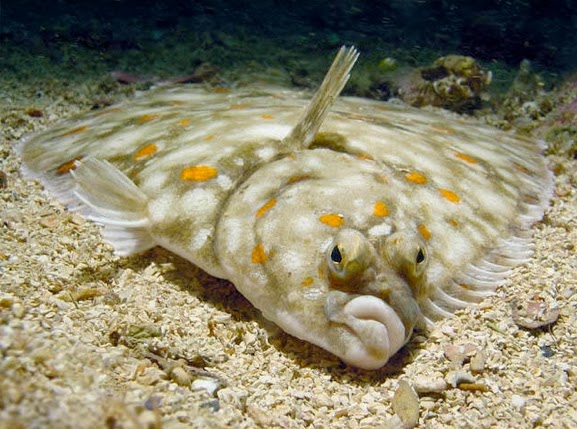 Will “Crappy Foot” Fish and his father Jon “Lumpy” Fish had very contrasting sessions. Will showed the old man his plaice and came in 2nd spot, his highest position of the season. On the other hand there was no ray of light for Jon. He didn’t win a single game and spent most of his time floundering about on the court. No codding! He didn’t win a single game. Hopefully eel do better next time and when the chips are down he won’t get too battered.
Luckily they both had a whale of a time.

It was another great and enjoyable session. Thanks to everyone who comes along and make our Sundays so much fun.

Posted by Hull Bicycle Polo at Sunday, January 26, 2014 No comments:

Wow! what a session. Thanks to all. 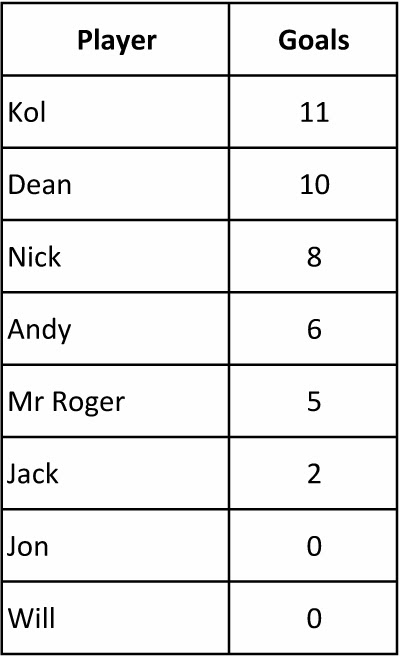 Posted by Hull Bicycle Polo at Sunday, January 19, 2014 No comments: 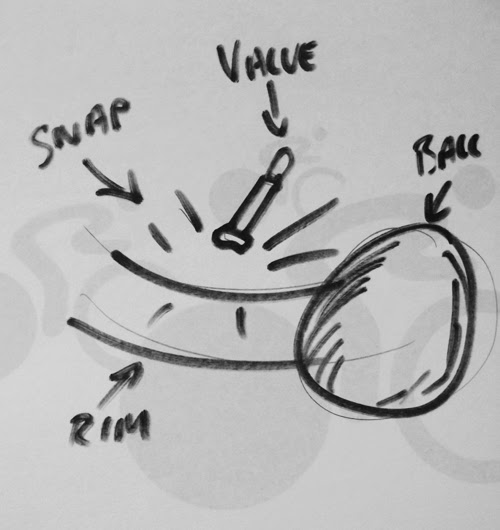 It was another great session last week. Lots of cracking goals, some bad misses and a lots and lots of fun.
One of the most impressive goals of the day was scored by Nick. His cracking shot flew straight through the goal keeper and the goal at such a speed that our speedometer failed to accurately record it and just registered it as “F••k me that’s fast”. That wasn’t the end of it though. The ball continued with incredible speed through the back of the goal and straight into the rear wheel of David’s road bike. The ball took the valve clean off the rim. Although we don’t want to pump up his ego anymore, we have to congratulate Nick on a very accurate shot and also the bonus of getting a goal at the same time. Well done Nick. Unfortunately David was left feeling a little deflated after the incident.
On a serious note. There are lots of valves out there to be knocked off and Nick can’t do it all by himself. Let’s get together and help Nick with this great cause.
If you feel you have got what it takes to knock valves off then email Nick at nickis@thatcantdoitallbymyselfagain.com. Thank you for your support.

There are only two sessions left in the winter season and things are hotting up. Kol leads the league closely followed by Nick. It will be an epic battle today between Nick and Kol today. This is Nick’s last session of the season and needs to get a good result today to stand any chance of winning the league for a third time. Only 4 points separate Jack, Andy and Dean in 4th, 5th and 6th places but a good result from anyone of them could see them challenging for Mr Rogers 3rd spot. The next two sessions are going to be very exciting indeed.

What a great session. Well done everyone

Posted by Hull Bicycle Polo at Monday, January 13, 2014 No comments:

Big Red Really is Back 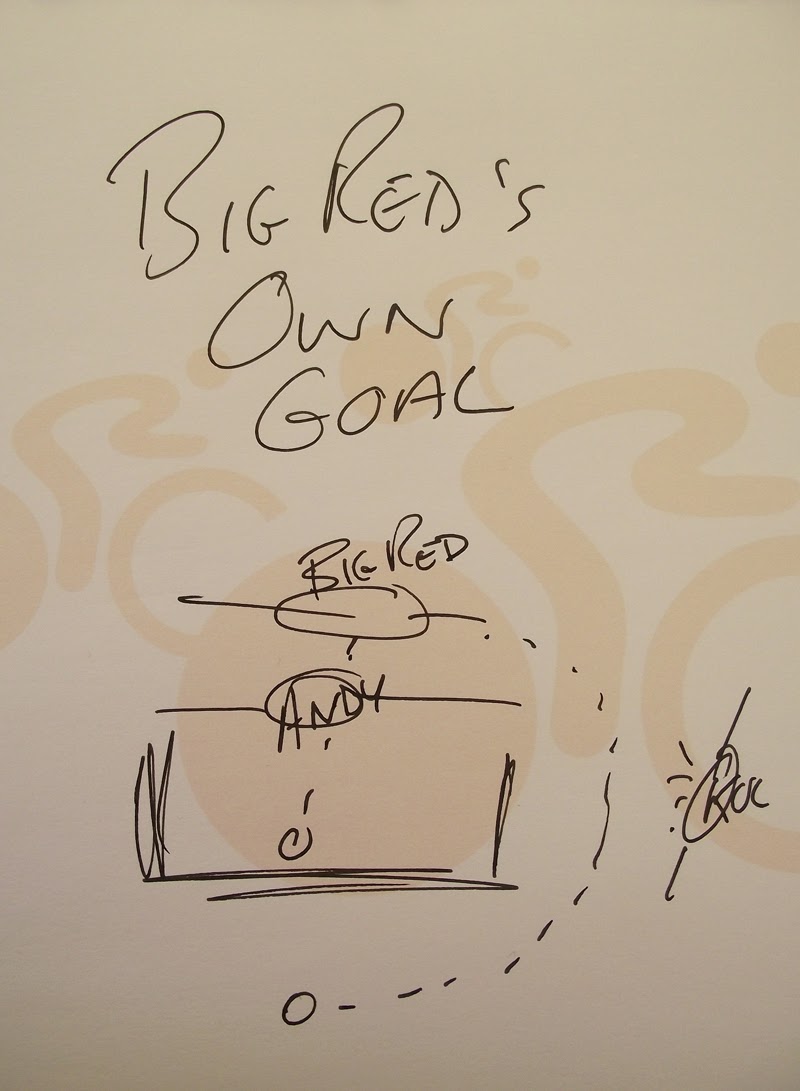 It was Big Red’s first session this season and what an impact he made. After turning up fully padded up and with a shiny new GoPro strapped to his helmet he looked like he really meant business. Big Red only made two mistakes that day. The first was to forget to charge the batteries in his GoPro. A simple mistake but a disappointment to Big Red as he was looking forward to testing it out on the court. The second mistake was much more impressive. After some excellent games and some cracking goals Big Red left it until the second to last game to lose the plot. The pressure was on. It was 0-0 with very little time left. After a missed shot from the opposition Big Red retrieved the ball. A great move saw him cut in front of Kol causing Kol to put a foot down and then he casually tapped the ball between Andy’s wheels straight into the back of the net. Kol and Andy stared in amazement as Big Red raised his arms in the air and celebrated. Then came the look of realisation. Big Red had just scored the most impressive own goal in Hull Bicycle Polo’s history. Kol, Andy and Big Red went on to lose the game 2-0. Welcome back Big Red, this is why we’ve missed you.

Nick took top spot and Mr Roger is getting back into the swing of things. After a few poor results he managed to secure a second place. Well done Nick and Mr Roger.

It was only Byran’s second session of the season and he seems to be getting his form back. After a disappointing 9th place in his first session Bryan was determined to do better and he did. Even though he managed to knock his own players off their bikes several times during the session he still managed to secure third place. His nickname seems to have become “Bryan the 3rd”. A great nickname indeed but may be difficult to live up to. “Bryan the 12th” just doesn’t have the same ring to it.
Posted by Hull Bicycle Polo at Sunday, January 12, 2014 No comments:

Another great session. Two accidental own goals and on very good own goal 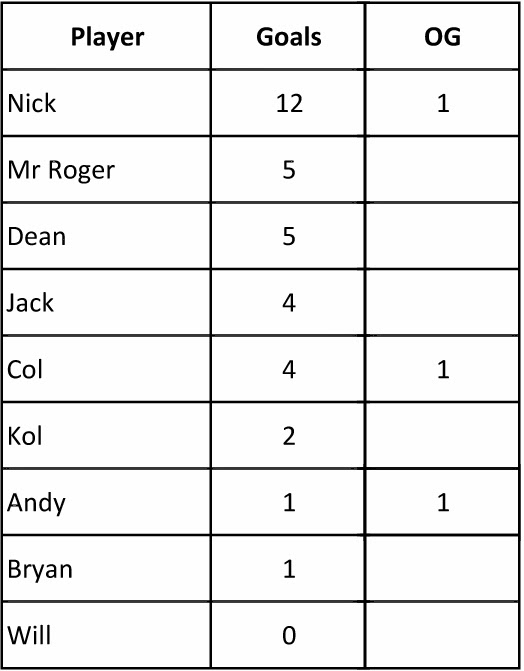 Posted by Hull Bicycle Polo at Sunday, January 05, 2014 No comments:

Big Red is Back 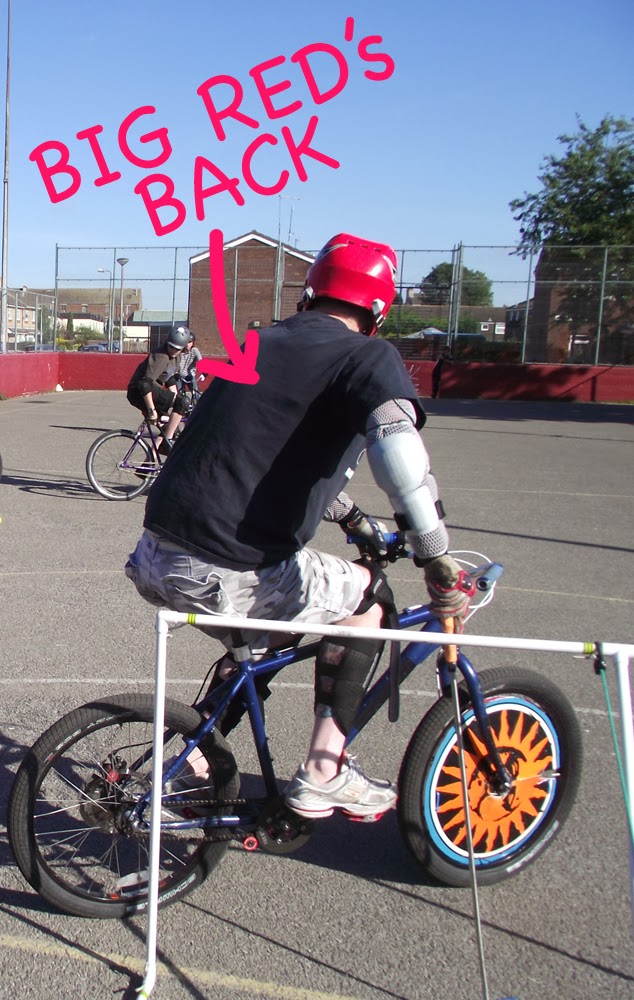 It is the first session of 2014. The sun is out and the sky is blue. What a great day for playing a bit of the old bicycle polo.

This week sees the return of “Big Red”. His first session this season. For you newbies who have not yet played with “Big Red” yet, be afraid.....be very afraid. His upper body strength will see the opposition bouncing off him as he runs rings around them on the court. His tight turning circle will make you so dizzy that you’ll be spinning. You know, right round, ....... like ............ like a record baby. Also watch out for him sneaking up behind you. The last thing you want is Big Red’s front wheel running up the back of your leg.

Last week saw Will “Crappy Foot” Fish get his first goals of the season.  His first was beautifully set up by Kol. All will had to do was get it in the back of the net. Jack made a valiant attempt to stop this happening but Will was having none of it and with a determined strike he sent the ball flying off Jack into the back of the net. For his second, he faced an open goal. Even Dean “Double Dean” Dent couldn’t have missed this one. With a simple tap he put it in the back of the net. A good job really. Imagine how much the rest of us would have wound him up if he had missed. Let’s have some more goals this week Will. Well done.